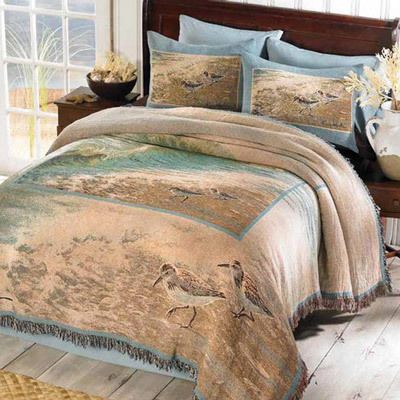 On any purchase above $25.00 when you sign up today!
Expires - January 31, 2021
Oops, there seems to be an error, please re-enter your email address.
Exclusive! By Hautman Brothers©, this waves-and-sanderlings jacquard woven cotton/polyester coverlet and coordinating cotton shams grow softer with every machine wash. Made in USA.

About the Artist
The Hautman Brothers© have established themselves among America's foremost wildlife artists. All three brothers have received numerous honors and awards, and have dominated many state and national duck stamp competitions. At last count, the three brothers have seen their art featured on over 46 state and federal stamps. James, Robert and Joe are the only brothers ever to win the coveted Federal Duck Stamp Contest. The talents of the Hautman Brothers as well as their unique family gift have been featured in the film FARGO. They have received national accolades from newspapers such as USA TODAY, THE WASHINGTON POST and MINNEAPOLIS STAR TRIBUNE.

While the majority of the Hautman Brothers© designs are North American wildlife, they have also painted a variety of animals from around the world such as tigers, pandas and penguins. For a look at their latest paintings, visit www.hautman.com.

I bought this to go with my ocean themed room. It goes perfect with everything else. I didn't get the shams before but I like the coverlet so well I'm ordering them today.

Your Satisfaction is Guaranteed

No sale is ever final. We unconditionally guarantee all merchandise. If you are not completely satisfied with your purchase, return it within 60 days of receipt to make an exchange or receive a refund (excluding shipping and handling charges). Your order is important to us and we want you to be completely happy.