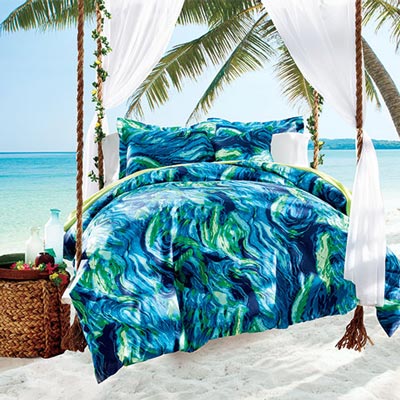 On any purchase above $25.00 when you sign up today!
Expires - December 31, 2020
Oops, there seems to be an error, please re-enter your email address.
Exclusive! Escape to the Islands! The polyester microfiber of our Tahitian Splash Duvet Set and Accessory is super-soft and easy-care. Machine wash. Imported. Comforter NOT included – a Duvet Cover goes over your existing comforter.

I have never had a duvet that didnt have ties inside to hold comforter in place. W

Your Satisfaction is Guaranteed

No sale is ever final. We unconditionally guarantee all merchandise. If you are not completely satisfied with your purchase, return it within 60 days of receipt to make an exchange or receive a refund (excluding shipping and handling charges). Your order is important to us and we want you to be completely happy.